We are a pasture based family farm in Winston Salem, NC. We raise lamb, meat and eggs on pasture.

Our animals live outdoors on the pasture, and are moved to fresh grass daily.

If you raise animals an are looking for a quality, affordable source of non-GMO feed, please connect with us.

Our journey toward sustainable farming started in 2008. We had come back to the States from a magnificent adventure living in Norway with Graham’s job in Engineering. We decided it was time to start having kids, and got pregnant immediately. The pregnancy was going along fine until the Day after Thanksgiving, when I felt pretty bad waking up, and that day my water shockingly broke at only 15 weeks pregnant. We were told the baby would not make it. Though I fought for his life for 2 more weeks, we lost the baby.

At the start of that pregnancy, I was told I had fibroids, non-cancerous tumors, that might possibly affect the pregnancy. I hadn’t thought much of it. But they grew larger through the pregnancy, and it was believed that there was a strong chance it had an effect on the ability of our child to survive in the crowded space.

I started doing some reading on fibroids and found that they were related to hormonal imbalances, estrogen dominance. I learned that this is caused by toxins in our food and environment, foods that mimic estrogen, many plastics, and in hormones present in conventional animal products.  We had never bought into the idea of buying organic foods. Graham saw them as silly status symbols. Especially when they came from a high end health food chain store that had just opened in our suburb.

Once my eyes were open to the fact that our whole food system is broken, I started making baby steps to make different choices.

I shopped faithfully at the Houston farmers market, in stifling heat, to buy grassfed milk and meats, pastured eggs, and organically grown vegetables.  I learned more and more as we transitioned our lifestyle.

I attempted to heal my fibroids with just the food changes I was making, but it wasn’t enough to make a difference immediately, and we were ready to try for babies again. We were SO fortunate to be dear friends with the best fertility specialist in Houston, Texas, who insisted that he check out my issue, and insisted that I should really have the fibroids removed before we tried for babies again. So I had that surgery, healed well, because I ate well and moved around as early as possible. And before too long, we were pregnant with Ephraim.

In our process of changing our foods, learning to cook new and interesting TRADITIONAL foods, we started to dream about growing good food for other people, owning land in the more moderate climate of NC and raising our family near some of our family in the area.

In 2011, we moved to our farm in Winston Salem with a 9 month old Ephraim to try our hand at raising good food to feed ourselves and our community. We started with poultry as our focus, taking lots of inspiration from Joel Salatin’s growing methods.  We grew some chicken and vegetables for ourselves that first summer, and in 2012, we joined the first season of the Saturday Morning Cobblestone Farmers Market at Old Salem.  We’ve continued to focus on poultry and eggs, and have since added lamb to our offerings, which is available seasonally.

We love cooking using traditional, pre-industrial cooking techniques from around the world. I have studied Weston Price’s materials quite a bit, and highly recommend Nourishing Traditions, and have become a fan of most of the Paleo and related eating guides. 5 years ago, nobody was talking about eating good fats, sourcing your meats well, and the importance of eating food grown the cleanest way possible. People are becoming more and more aware of traditional, real foods, and we’re grateful to be a part of helping people to source real, pasture raised, non-GMO, organically and ethically raised meats and eggs.

We had Emily in 2013 before the start of that year’s market season. When she was 6 months old, I was seeing symptoms of hormonal issues resurface. We started getting chiropractic care at Twin City Health at that time, which has helped with additional improvement of all of our health. Twin City also encourages a real food diet, and their team has been tremendously supportive of what we do.

With the encouragement of my friends at Twin City and our other customers and friends, I started Caldero Bone Broth at the end of 2015. I’ve been making rich, traditional bone broths since 2009 in Houston. It’s one of my absolute favorite ingredients to cook everything with. And it’s become very well known recently as to its incredible health benefits to multiple systems of the body.

This summer marked our 5 year anniversary of Winstead Farm. Thanks to all of our customers who support what we do! We love eating well and feeding our people well. Food is the best medicine. 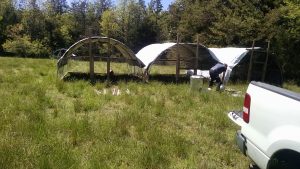 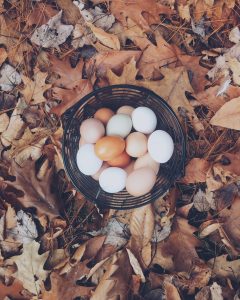 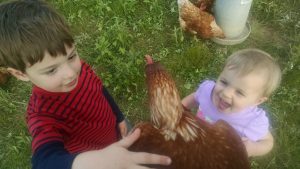